Skip to the content Dog Friendly Hike at Lake Louise

When we last left you, we were meandering up the Bow Valley Parkway, driving the 48 km from Banff to Lake Louise …

We spent most of the summer in the mountains, but the Canadian Rockies took me completely by surprise. First of all, the views are astonishing. In the American Rockies, driving through the mountains means traveling east to west and west to east, across mountain passes from one valley to another. In Canada, the Bow River runs north to south, roughly paralleling the Continental Divide, and paving the way for the highway to skirt along the highest peaks for miles. The feeling of quite literally being in the mountains is something we’d never experienced, and it took my breath away. 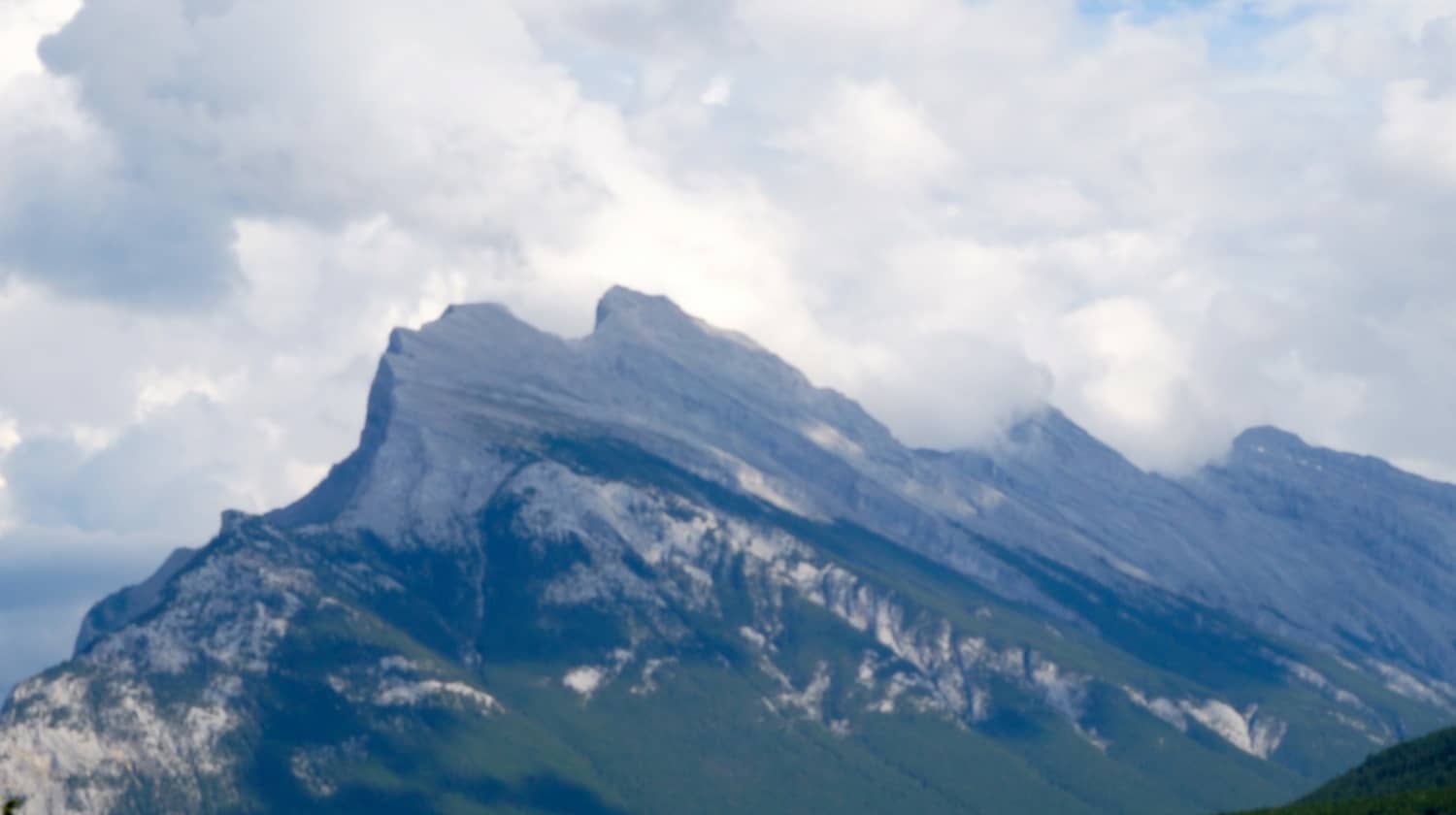 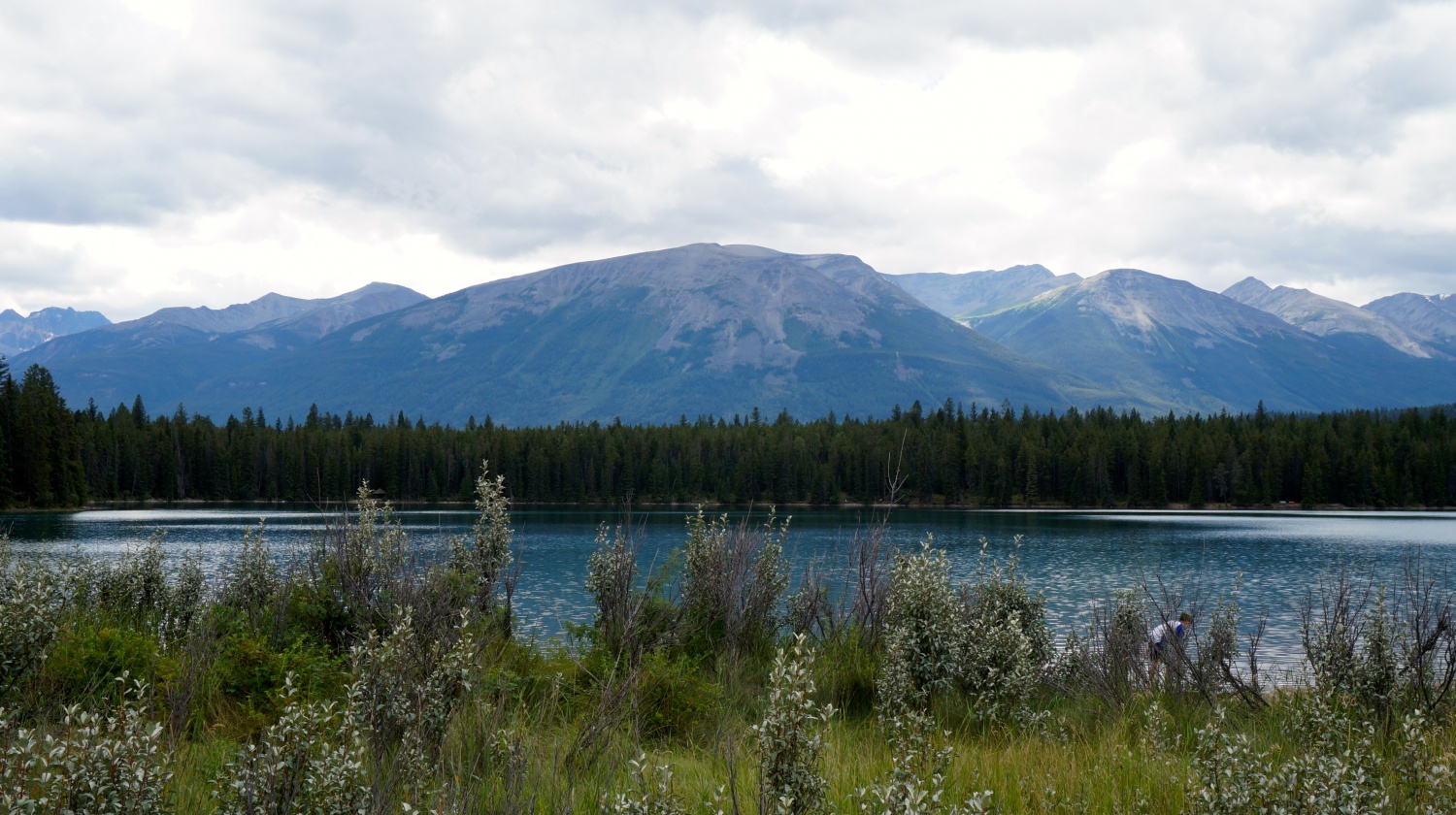 The way the Canadians care for the wildlife also made this experience exceptional. There is an attitude of stewardship that shows up everywhere – rangers patrolling the campgrounds at night, removing anything that might tempt bears … fenced-in highways with beautifully landscaped bridges to give the animals safe passage … even closing the Bow Valley Parkway at night from March through June, so mothers raising little ones can find food without being hit by passing cars. Respect and preservation take priority over entertainment, and that’s something I wish we’d do more of in the States.

And Then There’s Lake Louise

If the drive doesn’t leave you reeling, just wait until you catch your first glimpse of the emerald waters of Lake Louise! Fed by the Lefroy Glacier, the finely ground rock flour is deposited in the lake and gives it this spectacular color. 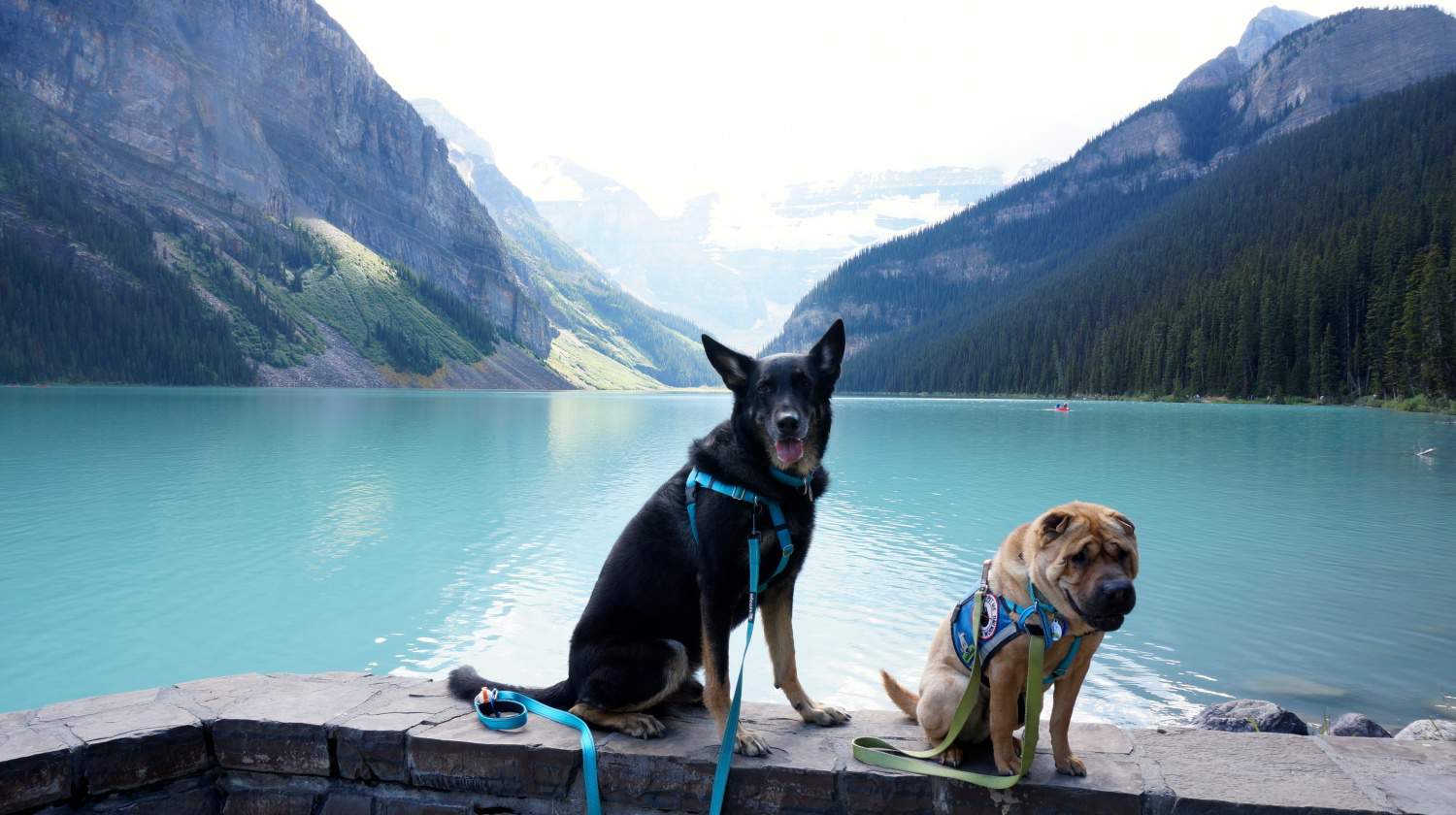 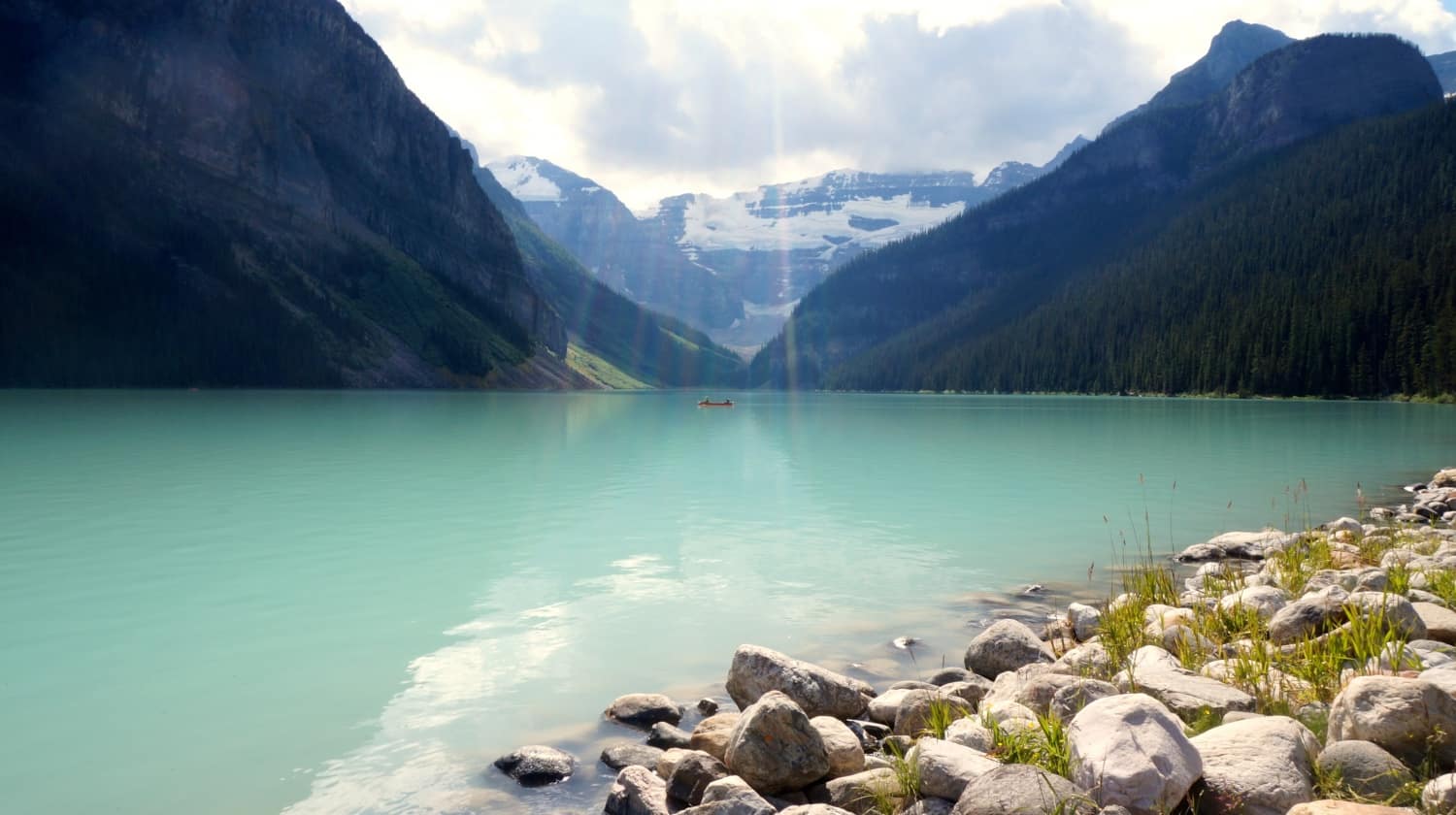 Though you can’t tell from the pictures, the lakeside was really crowded the day we visited. Mobs of people and lots of dogs were admiring the view, having lunch at the restaurant, walking the lakeshore trail, and renting canoes to paddle out for a closer look at the glacier. Because crowds and other dogs make Ty and Buster uncomfortable, we opted for an uphill hike where we were likely to find fewer people.

The Hike to the Tea House

Having a fine cup of tea on top of a mountain is a difficult thing to resist, so when we saw signs to the Lake Agnes Tea House the decision was made. 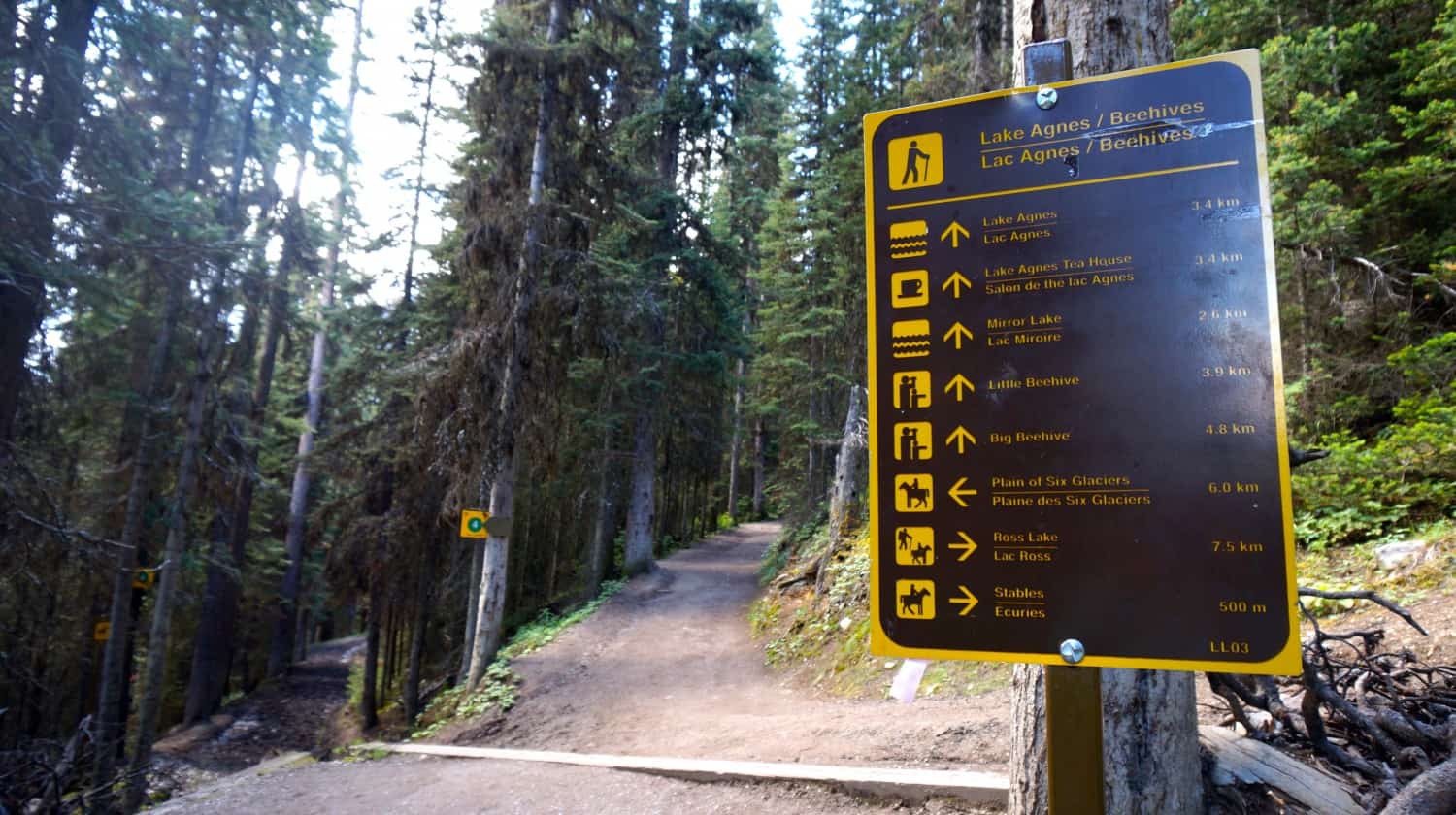 The advertised distance is 3.4 km, which converts to 2.1 miles, and seemed completely doable for an afternoon hike. Let me just tell you … I did that math in my head dozens of times on the hike up, convinced my rusty math skills had betrayed me! It’s a long, steep climb and we’d gotten a bit of a late start, so taking it nice and easy wasn’t really an option if we wanted to get back to the car before dark.

When a group coming down the mountain told us we were about halfway there, we nearly call it quits … but I’m really glad we didn’t. The views would have been enough of a pay-off, but the sandwiches and tea we had at the top were icing on the cake. 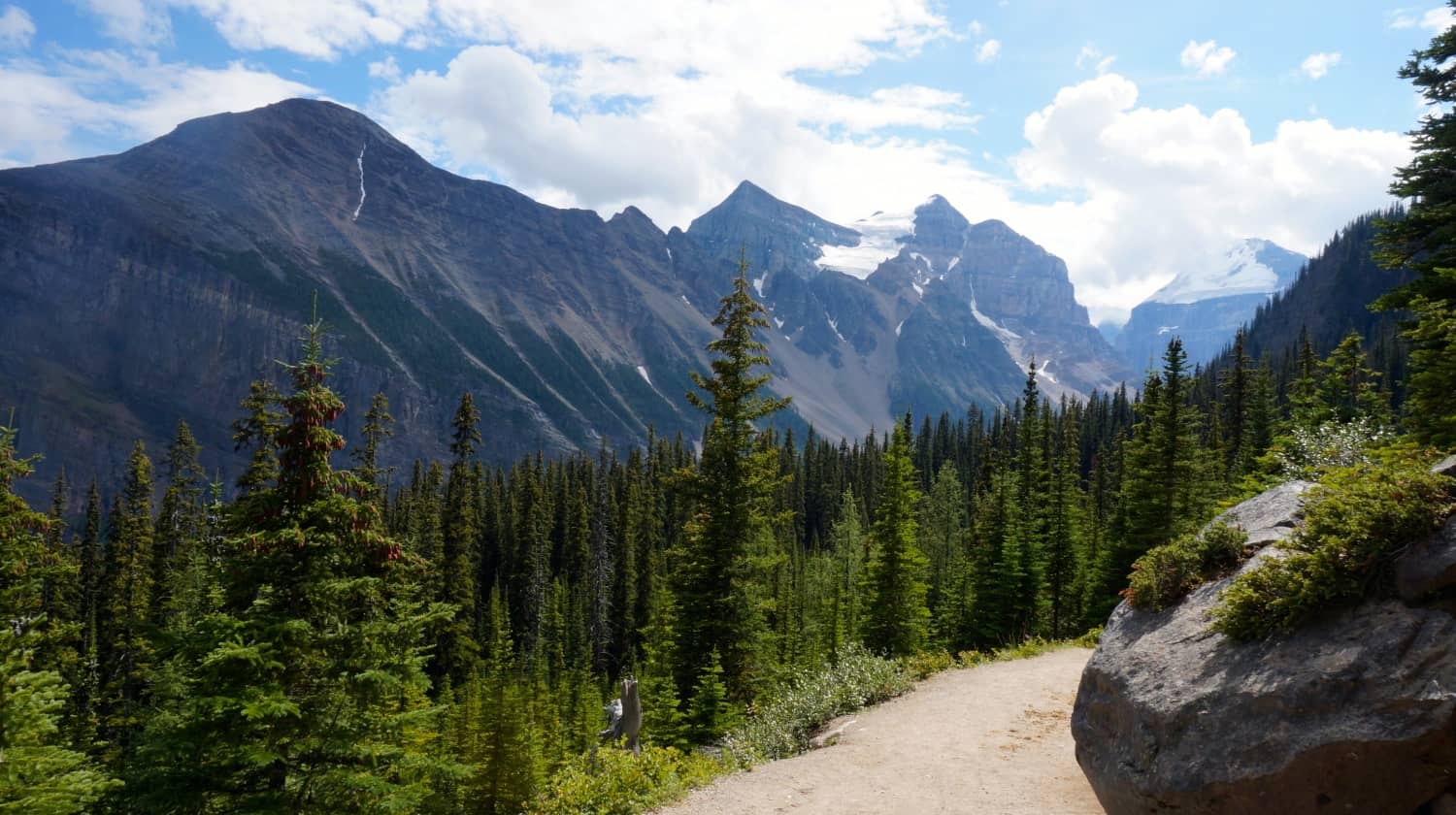 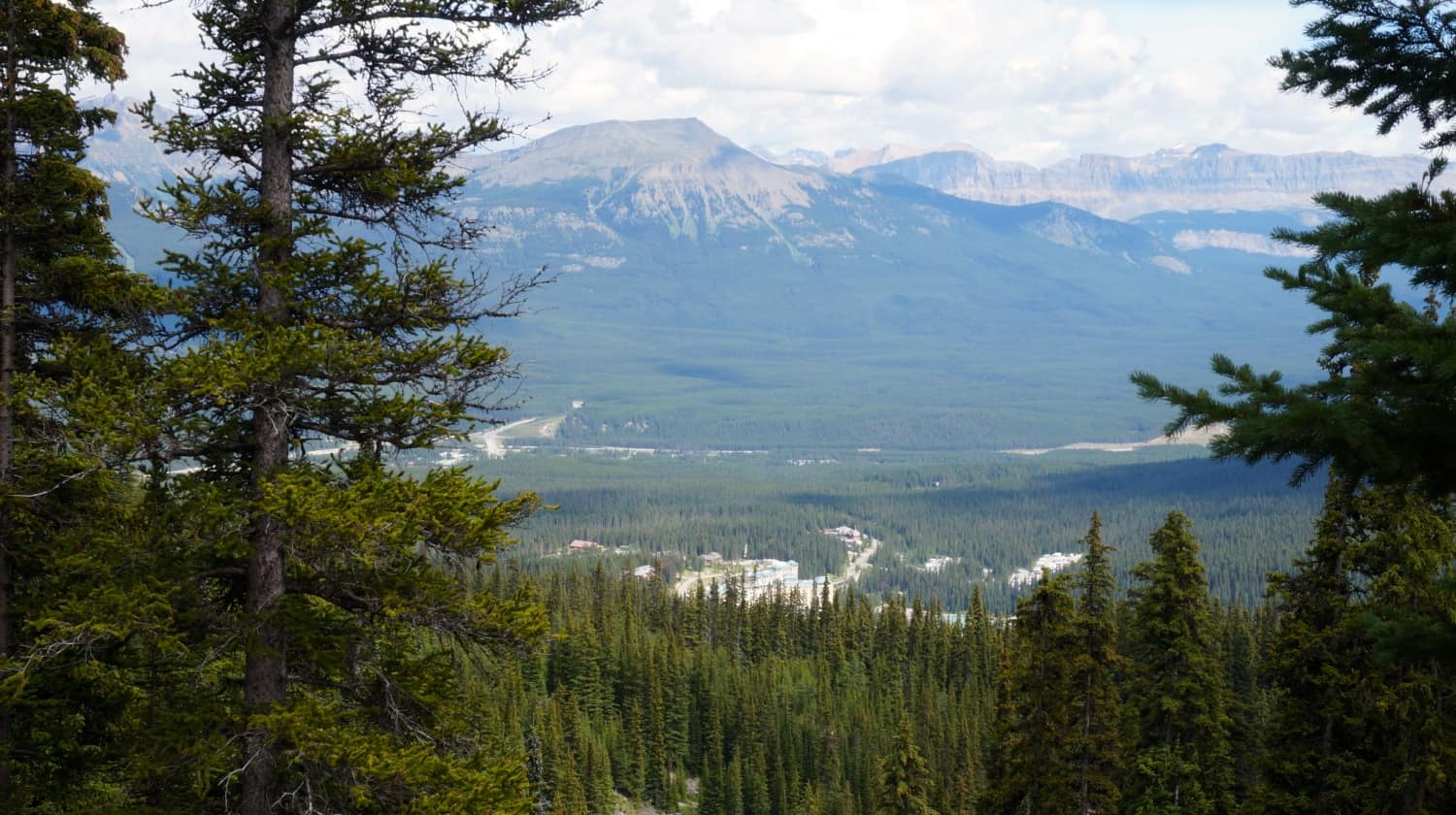 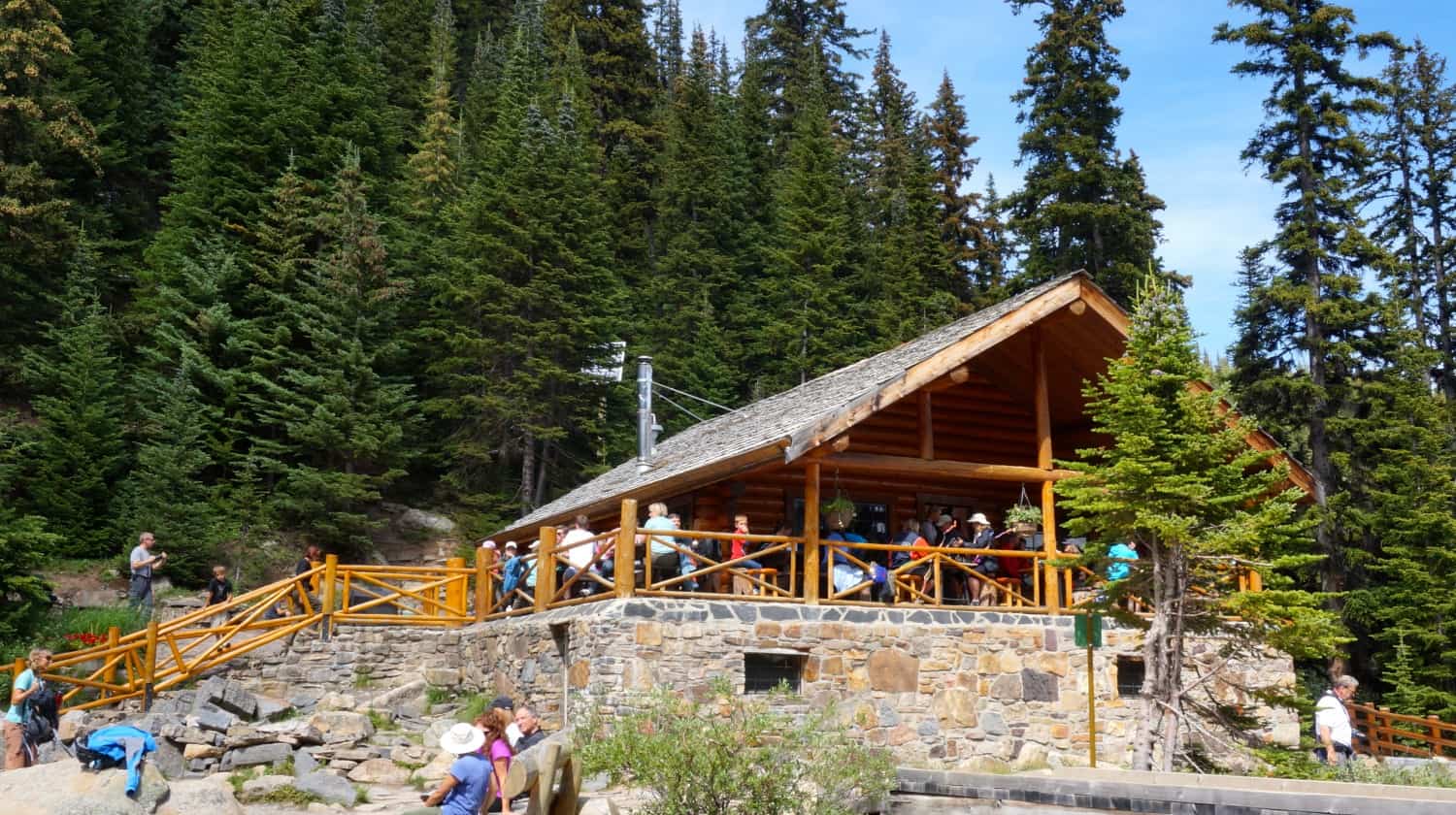 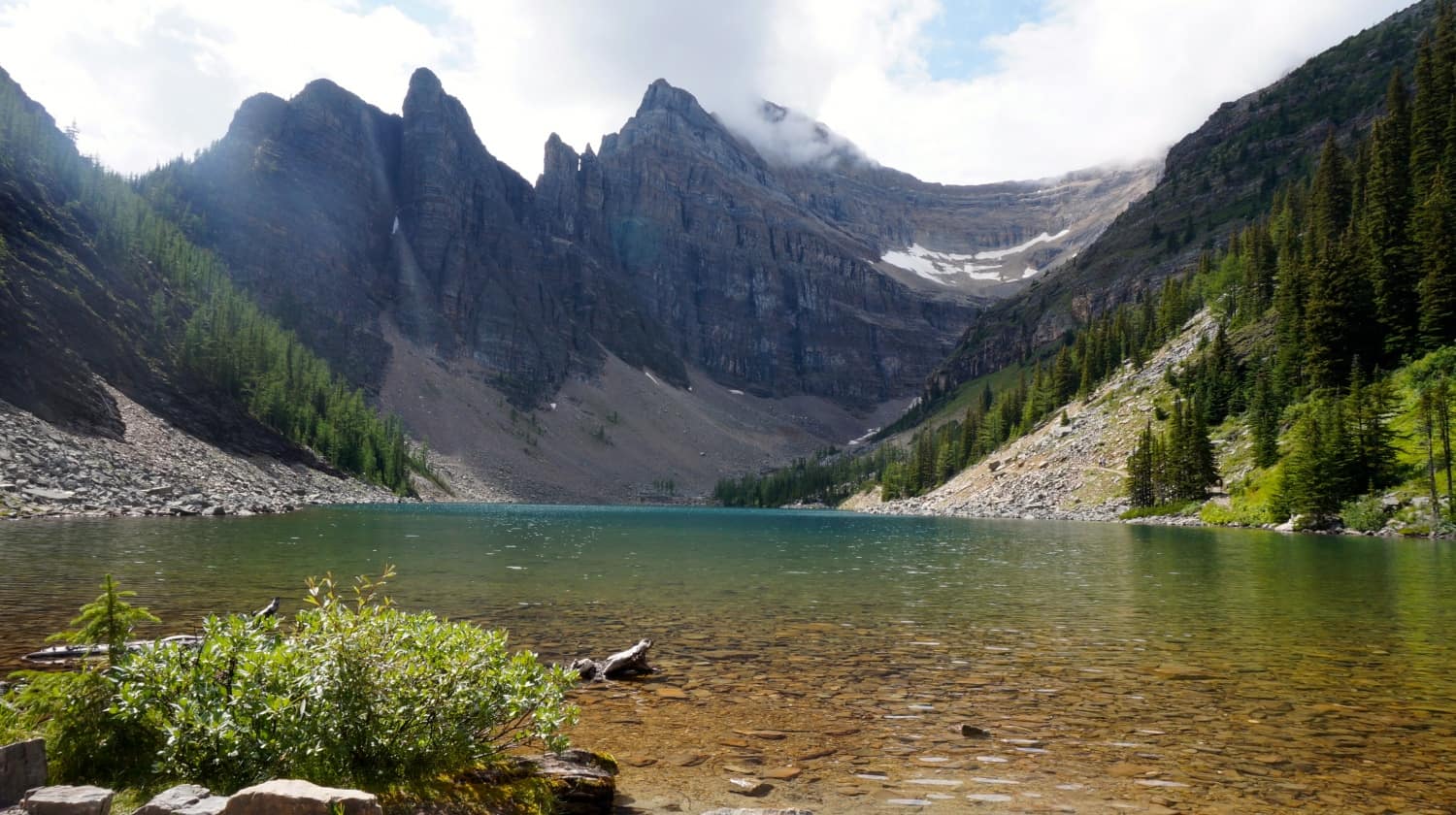 The Lake Agnes Tea House sits at 7,005 feet and was originally built in 1901 by the Canadian Pacific Railway as a refuge for hikers. Tea started being served in 1905 and, though the log building was replaced in 1981, it still features the original windows, tables, and chairs. I learned at the top that we’d gained 1,300 feet in elevation over those 2.1 miles, which helped to explain why my legs felt like rubber.

Turns out it’s a bit of a challenge to run a tea house at the top of a mountain. Everything is made from scratch, so at the beginning of each season, a helicopter delivers 10,000 pounds of supplies, including all the flour, sugar, propane and other dry goods. The fresh supplies have to be carried in by the staff two to four times a week. And each day they carry the garbage and recycling out on their backs!

Of course, no adventure would be complete if we didn’t get a few shots of the boys posing … so, while Rod was off fetching our snacks, I got the Buster and Ty into position. 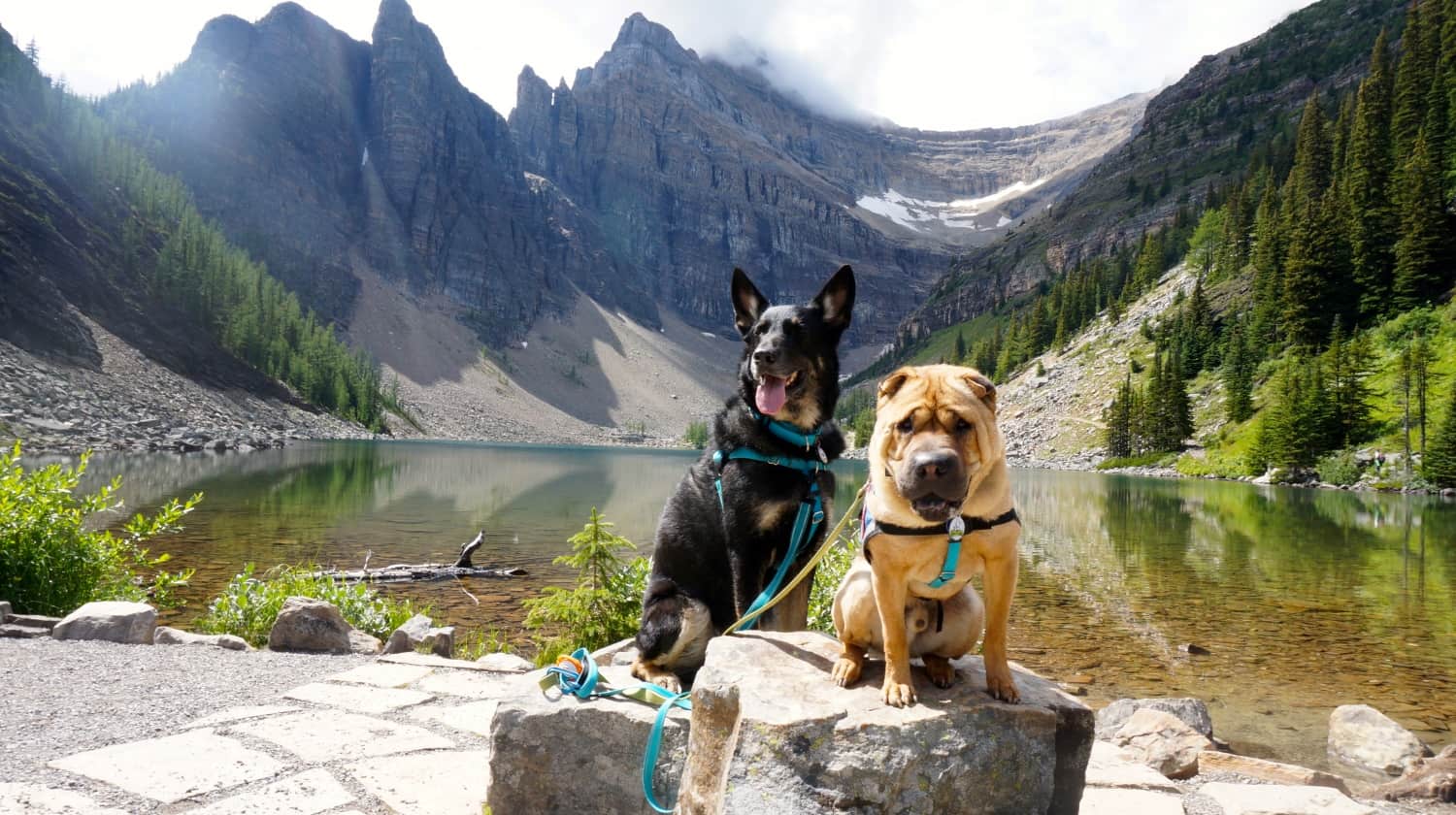 Everything was going great, until …

Even Buster’s expression changed when Ty caught the first whiff of decomposition. The picture taking came to an abrupt halt as I tried to seperate two wild dervishes from the stiffened body of a deceased chimpmunk. Ty was vigorusly shaking his new prize, Buster was struggling to get the “toy” away from Ty, and I was doing my best to return the chipmunk to his resting place …. without actually touching it. I’m sure we were quite an entertaining spectacle.

At least I didn’t scream or fall in the lake. By the time Rod returned, it was like nothing had even happened. 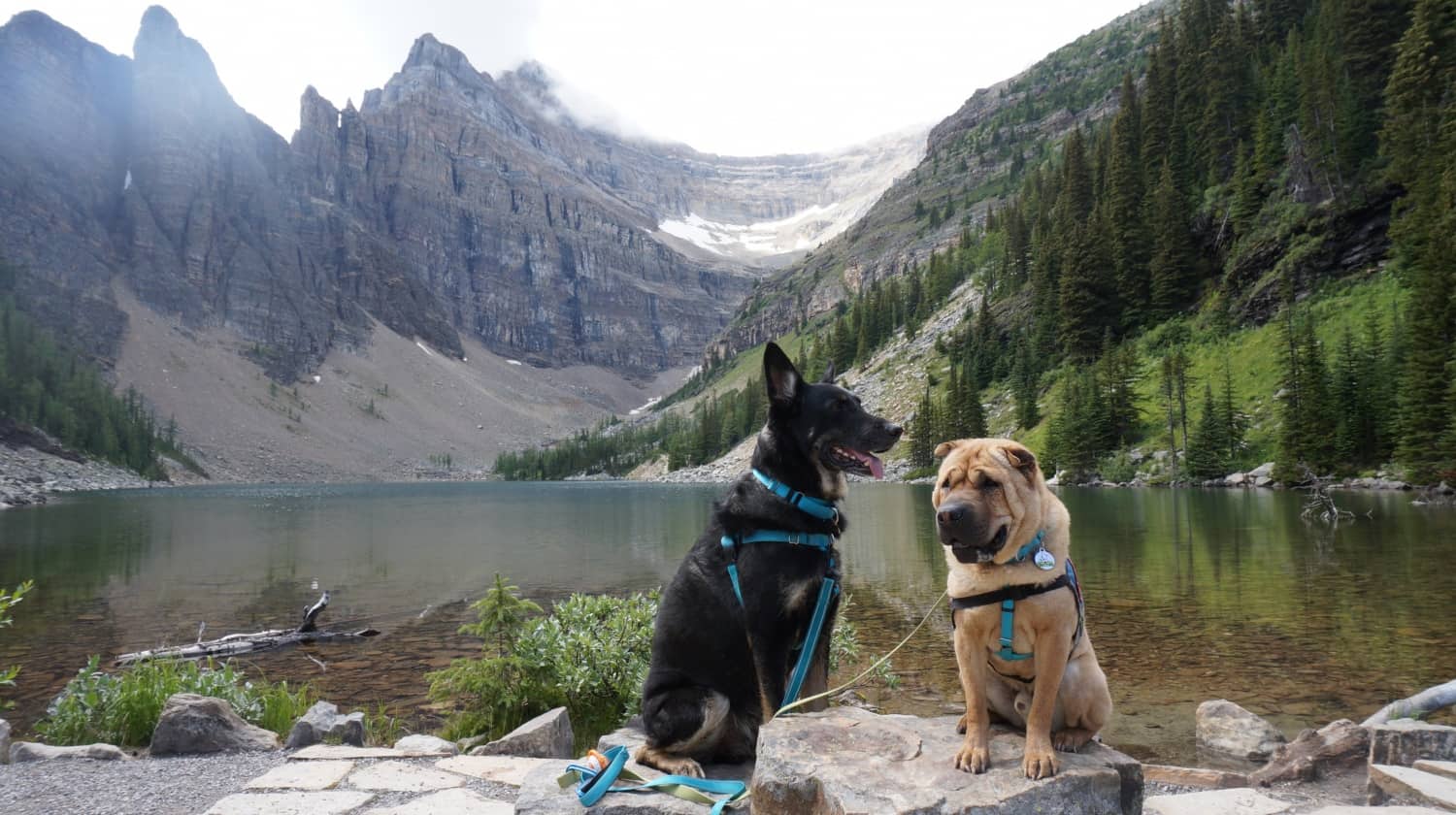 All the hiking around Lake Louise is dog friendly, though your furry friend must be kept on leash. And not all of the trails are as difficult as the one to the tea house, so grab your pup and plan to spend the day exploring!

Pet Friendly Things To Do In Santa Fe 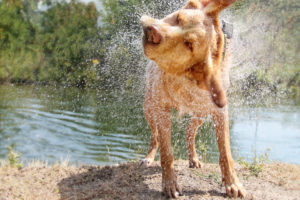 Plan A Dog Friendly Trip To The Outer Banks 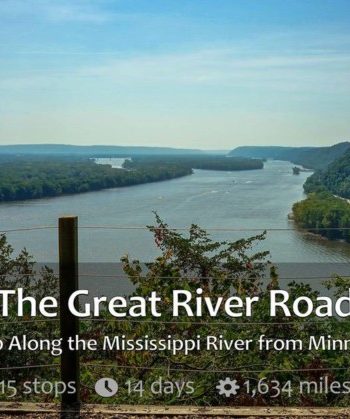