Between Savanna, Georgia and Jacksonville, Florida – about two-thirds of the way down the Georgia coast – Jekyll and St. Simons Islands lie like jewels in the Atlantic. They are two of the four barrier islands making up the “Golden Isles.” Whether the name refers to the color of the tawny marsh grasses, the sand-covered beaches, the sunlight glistening off the waves, or the privileged inhabitants that made this the most exclusive club in the world at the turn of the century, there is no question the islands’ nickname suits them perfectly. 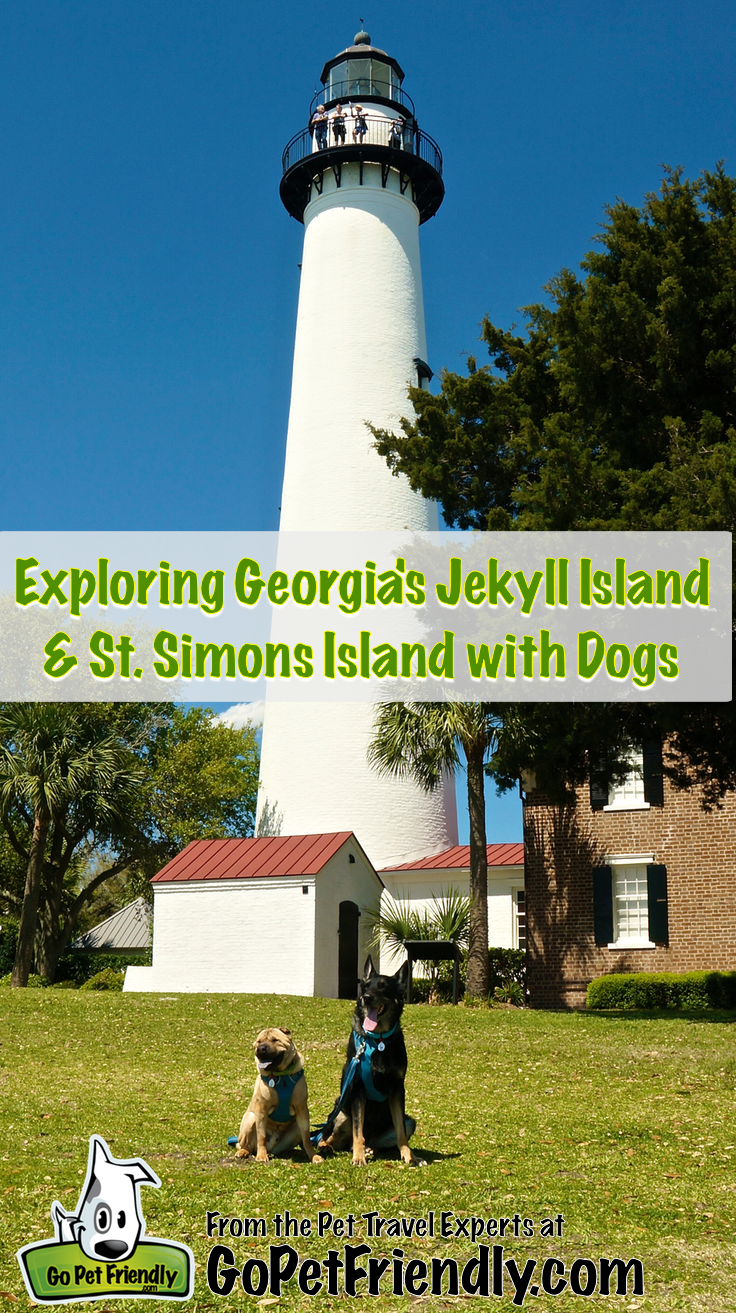 The Golden Isles are still enticing people to come, relax, unwind, be pampered, and take part in the history that permeates the atmosphere to this day. Whether you’re craving miles of serene beaches, historical landmarks, world-class golf, tranquil spas, or museums, galleries, and shops to peruse, you’ll find it here. And, while the islands have their distinct personalities, there is a harmony in the leisurely pace, glorious landscape, and gracious hospitality that runs throughout.

I can’t remember when I first heard about Jekyll Island, but I imagine it was during one of our visits to Newport, Rhode Island or the Biltmore Estate in Asheville, North Carolina. The mansions built by our country’s earliest entrepreneurs fascinate me, and I was probably touring one when I learned that Jekyll was another of their playgrounds.

The most affluent and influential families of the time – the Morgans, Pulitzers, Rockefellers, and Vanderbilts, among others – came to Jekyll Island to hunt and play golf. The Jekyll Island Club Hotel stands as a testament to luxury and opulence, and it is surrounded by “cottages” where the rich and powerful lived for a month or two each year. The area, affectionately dubbed “Millionaires’ Village,” is now a historic landmark district where you can step into the past touring the museum and homes. 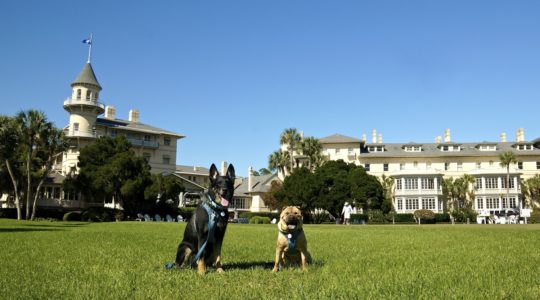 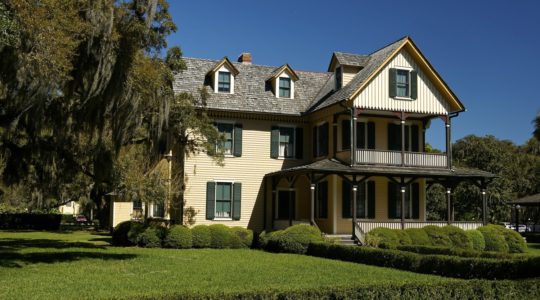 Of course, dogs are not allowed inside the buildings, but there are lovely places to walk and enjoy the gardens, views of the river, and a nice spot to get lunch. The Rah Bar has a spacious patio overlooking the Jekyll River where dogs are welcome to join you. 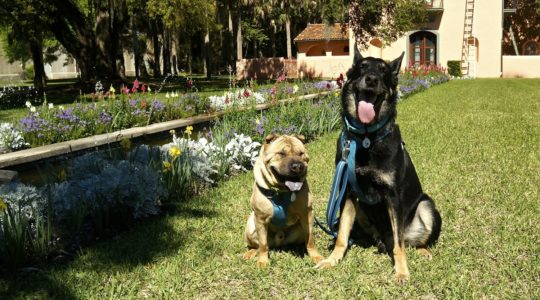 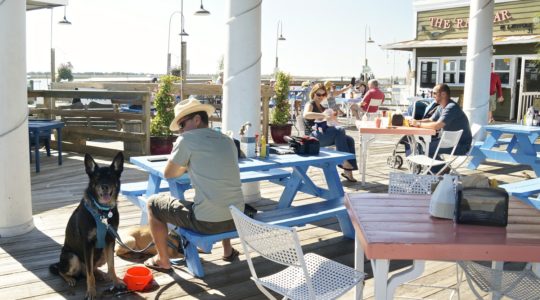 Sixty-five percent of Jekyll Island is protected under a strict conservation clause, which limits future development to preserve wildlife and protect natural habitats. This gives the island a wild feeling, and provides plenty of opportunities for bird watching, quiet reflection, and solitude. The entire island can be navigated by the pedestrian and bike path, which gives you easy access to the eight miles of sandy beaches.

With few exceptions, dogs are welcome on all Jekyll’s beaches as long as they are on a leash no longer than 16 feet. To protect the wildlife, the only places dogs can’t go (unless otherwise posted), is on South Beach between South Dunes Picnic Area and 2,000 feet northeast of St. Andrews Sound Picnic Area.

Great Dunes beach is the most popular with families and stretches across 20 acres, with picnic pavilions, a playground, volleyball courts, and public restrooms and showers available – but out favorite was Driftwood Beach, and it’s easy to see why.

Driftwood Beach is dotted with ancient driftwood sculptures, giving it the most unforgettable backdrop. There is also a huge fishing pier to explore, and a lovely view of the Sidney Lanier Bridge, which connects the island to Brunswick, Georgia and on to St. Simons Island. 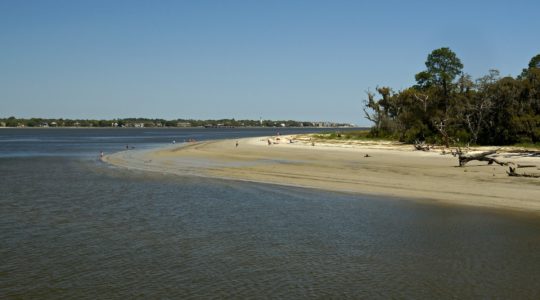 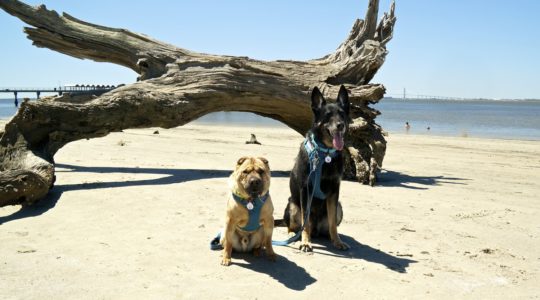 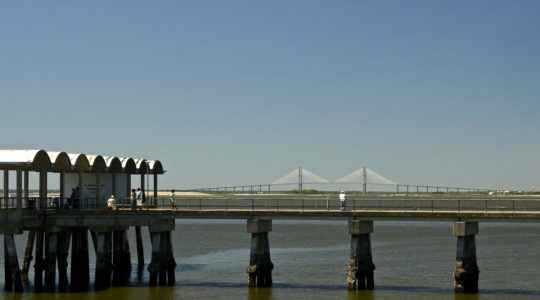 Historic downtown Brunswick is just 13 miles from Jekyll Island, and has some unique features all it’s own. Be sure to stop in and have a look around on your way up to St. Simons.

St. Simons Island is just seven miles up the road from Brunswick, and is the largest of the Golden Isles at 18 square miles. Though they’re close geographically, Jekyll and St. Simons Islands have radically different pasts – where Jekyll developed into a posh club, St. Simons became a military base and then home to fourteen working plantations, cultivating rice and cotton with slave labor.

In 1734, James Edward Oglethorpe, a British soldier and politician who lead the colonization of Georgia and helped establish the city of Savannah, sailed down the coast to find strategic points that could be fortified to protect the fledgling city from Spanish attack. He found St. Simons, and two years later returned with 44 men and 72 women and children to establish a fort and town overlooking the Altamaha River. 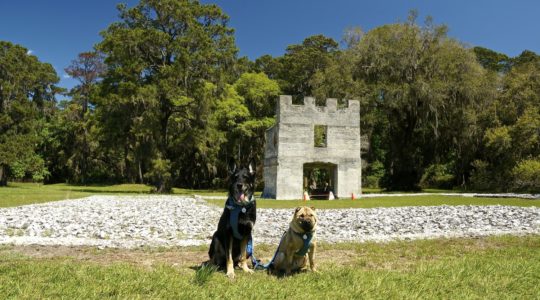 Oglethorpe named the town after the king’s only son, Frederick, and it flourished. The homes were built of wood, brick, or tabby (a concrete-like mixture made of burnt oyster shells), and orange trees lined the 75-foot wide main street that ran from the town gates to the fort. 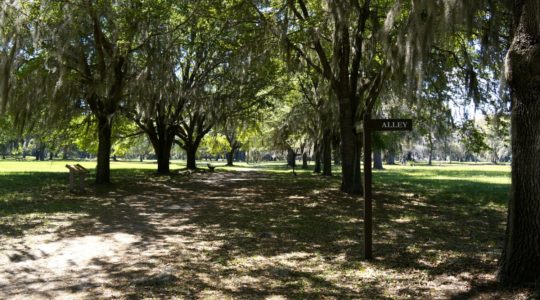 But with the end of British and Spanish hostilities, the military regiments were disbanded, and without their needs to fill the town’s shopkeepers and tradespeople couldn’t survive. The town eventually fell away until only the foundations of the homes and the outlines of the streets remained. It’s now a national monument, and dogs are welcome to explore the entire park with you. Maps and a walking tour route can be picked up in the visitors center. 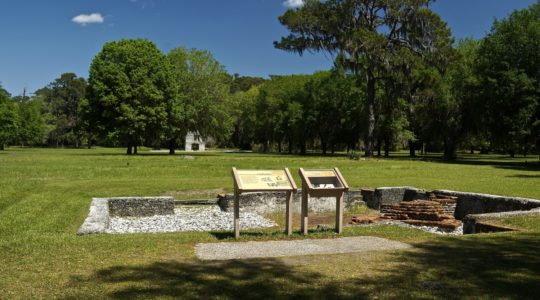 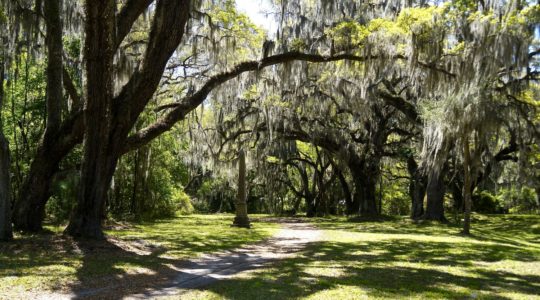 During early mornings and evenings, and in non-summer months, dogs can be off-leash on the beaches, as long as they are under the immediate control of the person they’re with – otherwise a leash no longer than 10 feet is required. For the summer season, dogs are not allowed on the beaches on St. Simons between 9am and 6pm from the Saturday before Memorial Day through Labor Day.

So, what does a dog who wants to run in the middle of a summer day do? Head to the fenced dog park, of course! St. Simons has two off-leash dog parks, one in Frederica Park and the other in Epworth Park. We took the boys over to the Frederica Park dog run after visiting the fort so they could burn off a little energy.

We were there on a weekday and had the whole place to ourselves. Buster loved having the opportunity to chase his squeaky ball … 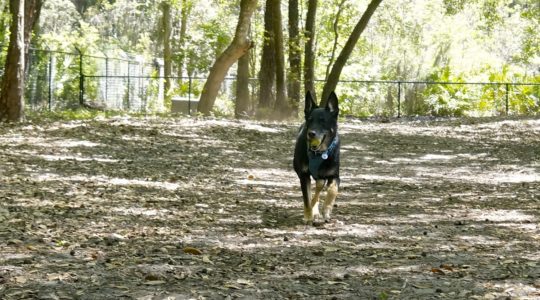 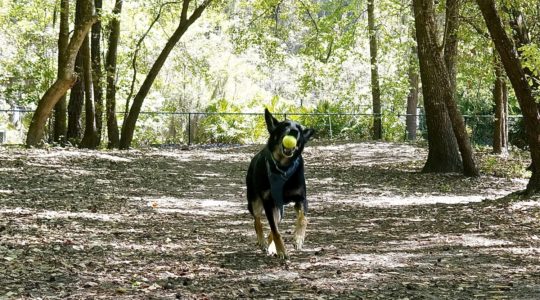 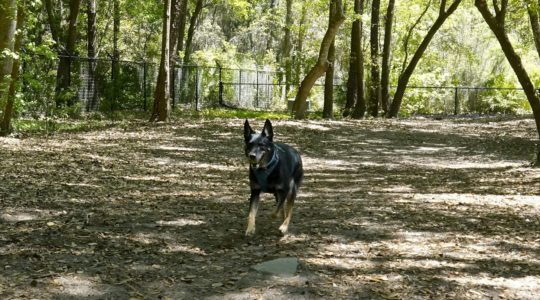 … and Ty enjoyed hiding in the bushes and conning Rod into sharing his snack. 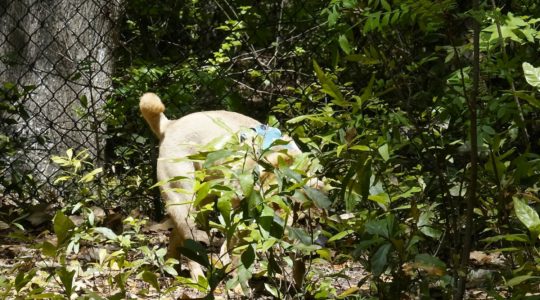 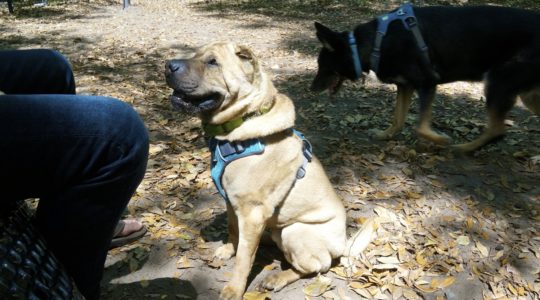 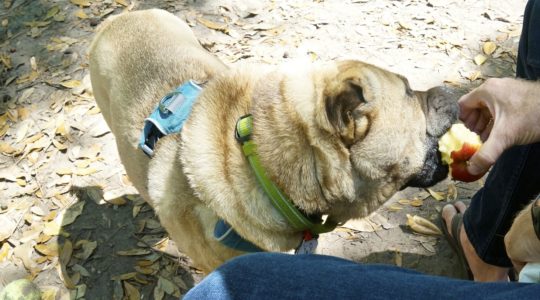 Like on Jekyll Island, bike and pedestrian paths wind along beneath colossal, moss-draped oak trees, connecting St. Simons most popular sites and making the entire island easily accessible. From the dog park we made our way to Pier Village, where the current St. Simons Island Light replaced the original in 1872. 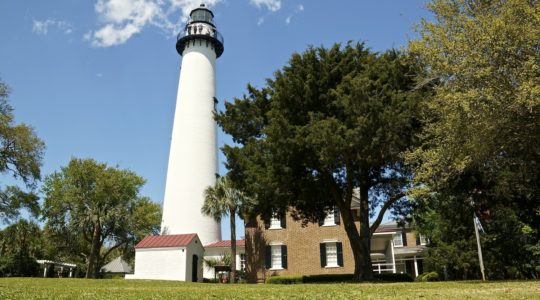 A paved path leads from the lighthouse through the park toward the pier. While dogs aren’t allowed out on the pier, they are welcome on the path, in the park, and on the beach during the times provided above. 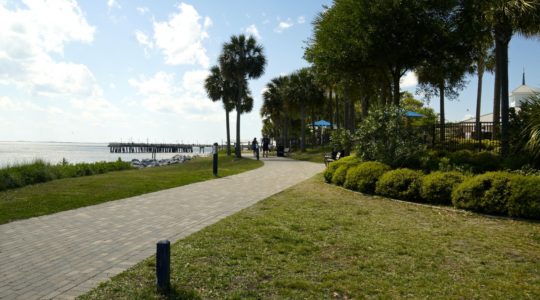 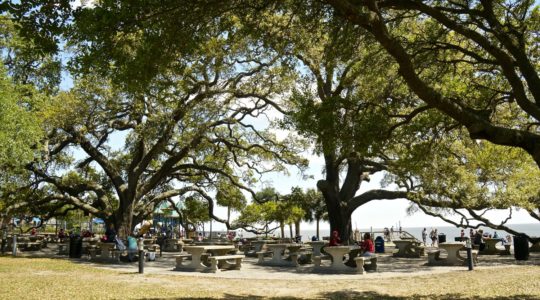 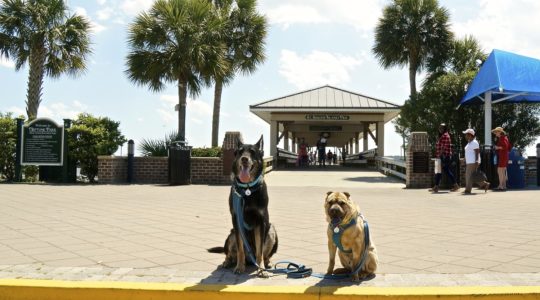 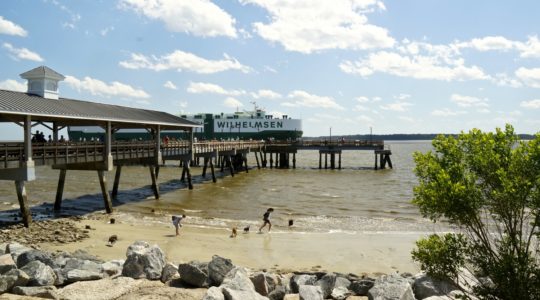 This was our first visit to the Golden Isles, and we’d love to spend more time here resting and recharging! There are many pet friendly hotels in the area, an RV park on Jekyll Island that is convenient to all the attractions, and plenty of dog friendly fun for everyone. If you’ve been here, leave a comment below with your favorite things to do with your pooch!

US State Parks That Allow Pets – Your Guide to Pet Friendly Cabins, Campgrounds, Beaches, and More