Skip to the content Tips For Traveling With Fearful Dogs - GoPetFriendly 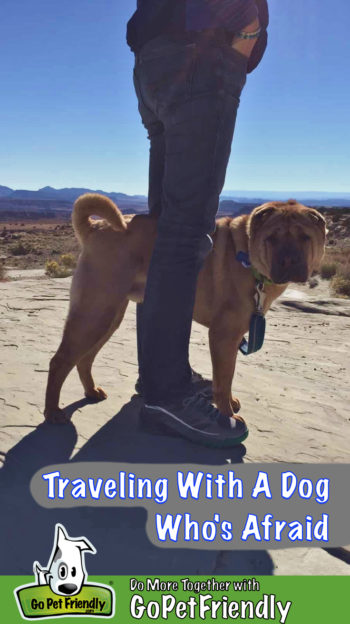 Last week I was chatting with a friend when she mentioned a dog she’d seen at the marina where she’s staying. The story she shared broke my heart. It reminded me how difficult traveling with fearful dogs can be. And I felt grateful that I’d had the experience myself – it gives me more empathy for those pups and their people.

If you’re relatively new to this blog, you might only know our current pup, Myles. He’s the happy, goofy boy who loves all dogs and people that we found as a stray in San Antonio.

Before Myles, we traveled for ten years with Ty and Buster. And, while we loved them dearly, our boys were not the easiest travel companions.

Buster was also a stray who was about a year old when he found us in 2008. We guessed he missed out on socializing with other dogs during his formative puppy months, because he was uncomfortable around most other dogs – especially when he was on leash.

Ty also had fear issues. Even as a little puppy, he was afraid of strangers. And, after being attacked at a dog park when he was six months old, he never cared for other dogs.

People who met the boys or saw pictures of them traveling around the country often commented on how well-behaved they were. I suppose that was partially true. But the impression they made was due more to our careful management of the situations we put them in. As much as possible, we avoided places and circumstances that triggered their fears.

The friend I was speaking with has also had fearful dogs, so we both felt for the pup she’d seen in the marina. The little dog was doing everything he could to communicate his desire to be left alone. But he was ridiculously cute. And people didn’t seem to understand that his barking and shaking were signs to back off.

I wish I had a nickel for every time someone replied, “But I’m a dog person!” when I told them Ty didn’t want to be petted. What those people meant was that they loved dogs, and of that I have no doubt. But a true dog person appreciates a dog’s feelings, reads his body language, and respects his space.

Unfortunately for the little dog in the marina, people were approaching and petting him — though that was clearly not what he wanted.

To make traveling with our fearful dogs easier, we taught them commands that gave them alternatives to their instinctive behaviors. For example, we taught Buster “find it,” which meant we’d tossed treats on the ground for him to sniff out. We used the command whenever a dog passed close enough to make Buster tense. It kept him from barking and lunging at the other dog.

The command that helped Ty most developed more by accident …

Buster and I were out playing one day, and I decided to add the extra step of him running through my legs after fetching his ball to get his treat. B learned things really quickly, and had it down in no time.

Ty was watching us, so I decided to try it with him, too. Since he never understood the point of fetch, we were just working on him walking through my legs. He got as far as standing between my feet, and never progressed beyond that point.

Rod and thought Ty’s new maneuver was funny. So we called it “parking in the garage” and started giving him treats whenever he did it.

Before long it became a habit for Ty to stand between our legs for a treat whenever we stopped on our walks. It took us a little longer to figure out how useful it was to have Ty in that position!

Work With What Your Dog Gives You

Ty’s fear of strangers made him uncomfortable in crowds and whenever someone he didn’t know stopped to chat. Both of those things happen a lot when you travel as much as we do! But after discovering his “garage,” Ty was able to relax when we were out and about.

Some of Ty’s most fearful moments were waiting on busy sidewalks to cross the street, watching other hikers pass on crowded trails, standing in line for any reason, and stopping to chat with someone he didn’t know. I imagine he was always worried that someone would try to pet him.

But after he learned “in the garage,” things were different. He seemed to understand that we’d protect him from unwanted advances while feeding him treats, and he was much calmer. This trick also allowed us to relax – knowing exactly where he was and that he was safe. It was a happy accident that worked out beautifully for us all!

In fact, though Myles is the most social dog I know, I’m teaching him to “get in the garage,” too! Sometimes knowing exactly where your dogs is, that he’s not going to be stepped on by other people, and that won’t try to greet a dog who doesn’t want to interact, is priceless.

Dogs Are The Best Teachers

Ty and Buster never completely overcame their challenges. But learning to help them manage their fears made all of our lives better. I hope what they taught me can help those of you traveling with fearful dogs. 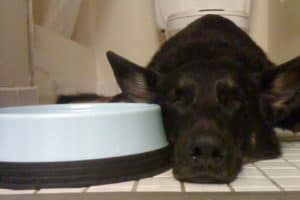 Pet Travel Tips For The Dog Days Of Summer

Tips For Moving With Pets