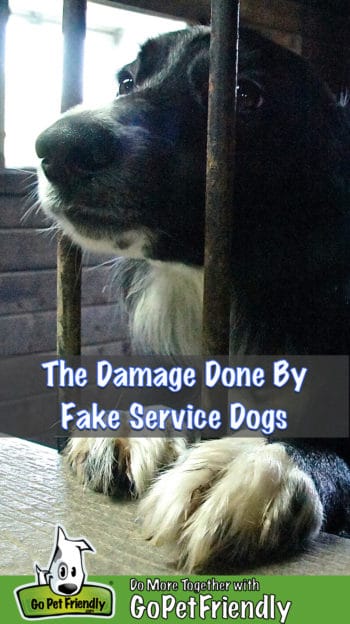 It’s no secret that I’m appalled by people who claim their pets are service animals. Naturally, I understand the desire to take our pets everywhere we go. And yes, compared to other places in the world, the limited access our pets experience is frustrating. But taking any action that makes life more difficult for people who require service animals is reprehensible. And now the impact of fake service dogs could bite us all. 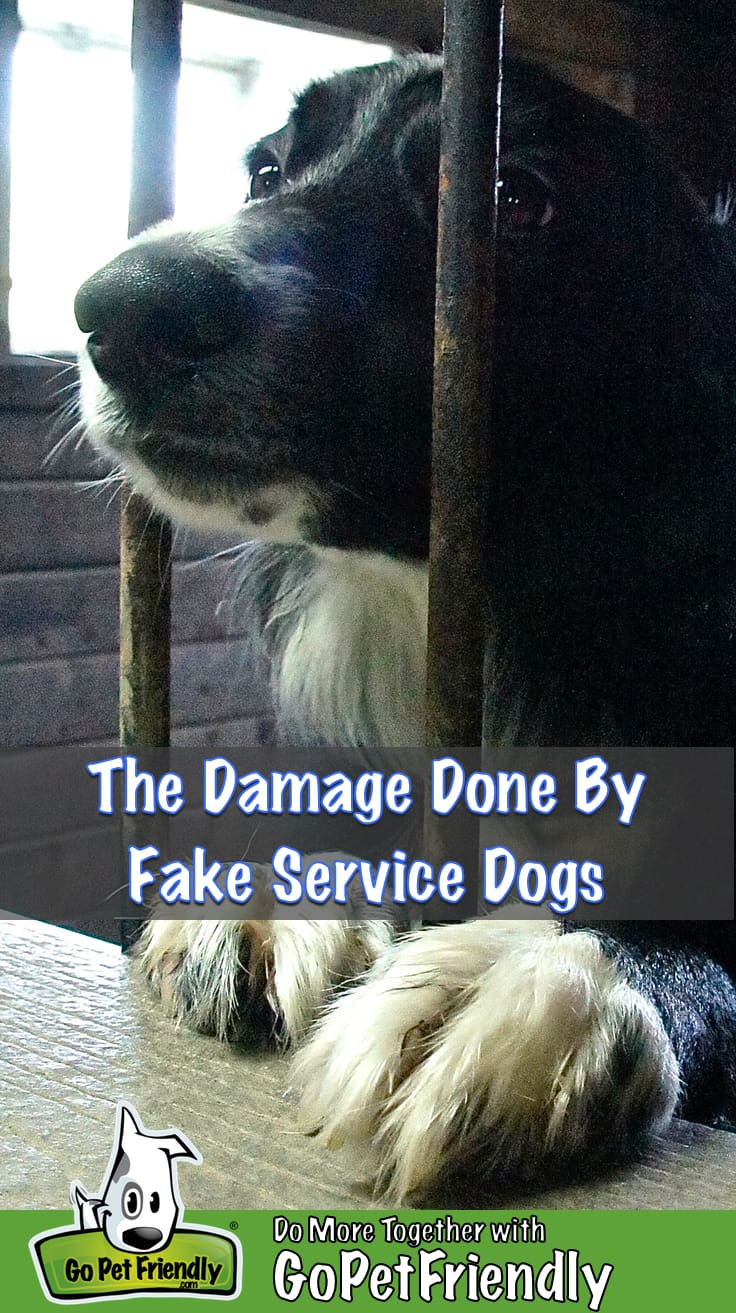 An Epidemic of Fake Service Dogs

We launched GoPetFriendly.com in 2009, in response to a growing trend. People were looking at their pets differently – less like livestock and more like family. There was a desire to include pets in our lives, whether it be brunch with friends or a cross-country road trip. Passionate about this movement, we hoped our website would help people discover more things they could do together.

Over the years, the market has responded to meet the needs of pet lovers. There’s been a significant increase in the number of hotels that welcome pets. Restaurants, coffee shops, and bars have outdoor seating areas where pets were allowed. And all kinds of attractions, from beaches to museums, are pet friendly. Even the national parks have started a BARK Ranger program!

READ MORE ⇒  The Most Pet Friendly National Parks in the U.S. 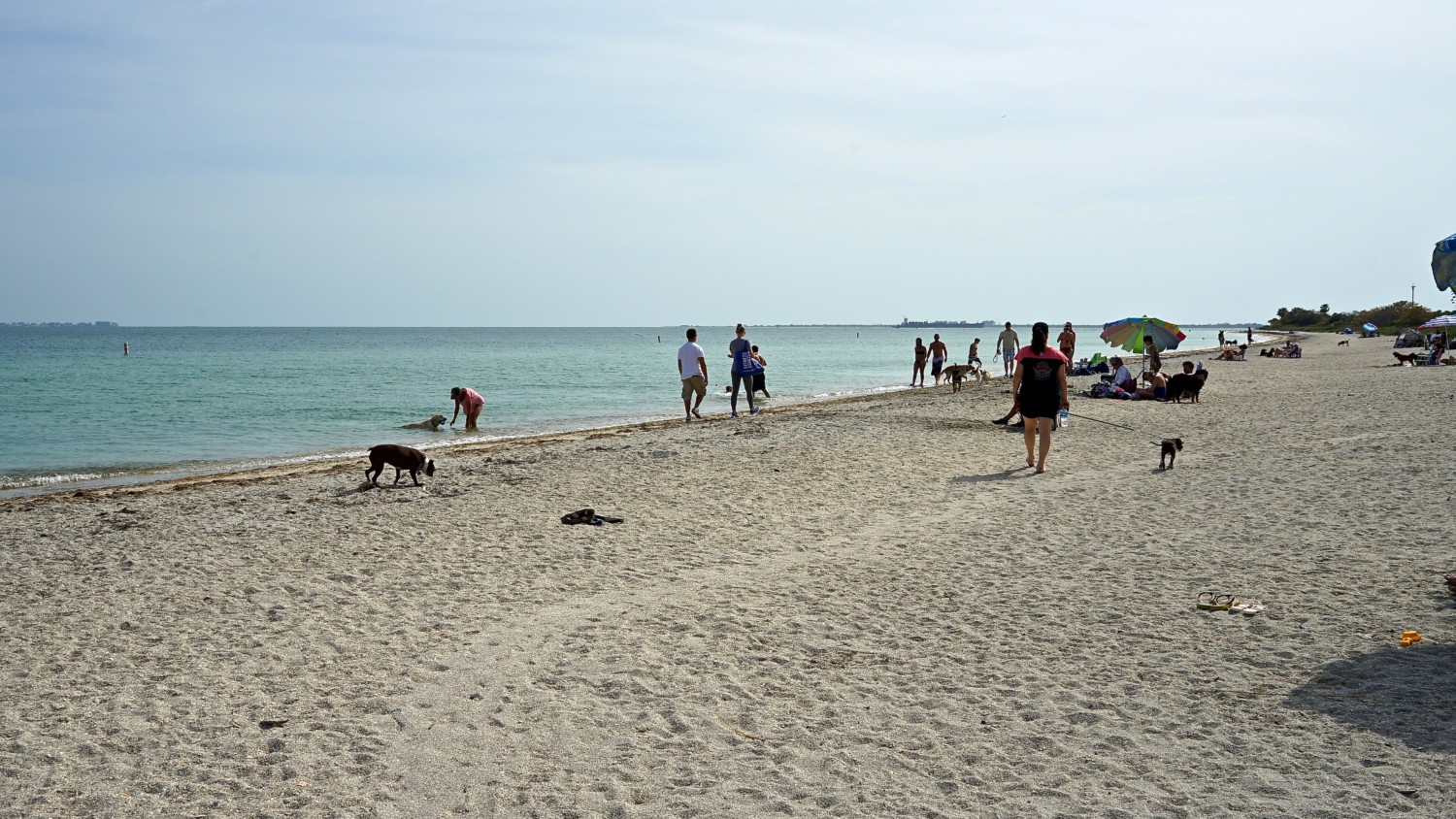 Of course, not everyone has been satisfied with the pace of change. They want to take their pets everywhere, without limitation, all the time. And the morally bereft among them choose to pose their pets as a fake service dogs, with no regard for the fact that their actions cause people to question the legitimacy of actual service animals.

Unfortunately, the problem has become rampant. Airlines have been forced to tighten their requirements for service animals and emotional support animals, and many states have responded by passing additional legislation.

The Americans with Disabilities Act makes it a federal crime to pass your pet off as a service animal. Unfortunately, it’s rarely enforced. To combat the issue, states have enacted their own laws exceeding the federal law penalties for fake service dogs. Currently, 31 states ban the fraudulent representation of a pet as a service animal. Five additional states have laws that criminalize some aspect of service animal fraud. And still the problem of fake service dogs remains. 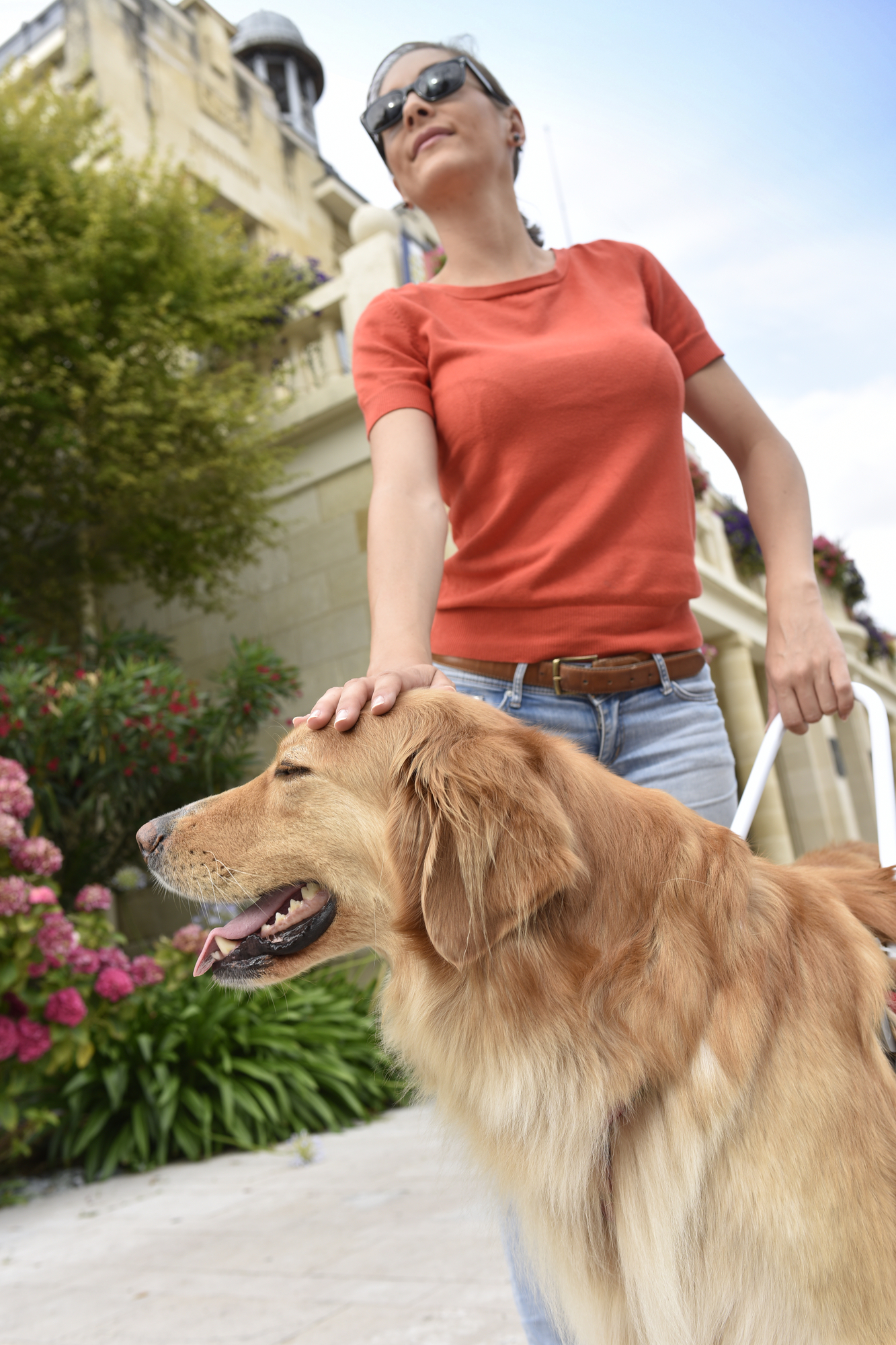 In 2015, Florida addressed the issue of fake service dogs. In addition to federal charges, misrepresenting a dog as a service animal in Florida is punishable by a $500 fine and up to 60 days in jail. But State Representative Bruce Antone from Orlando doesn’t believe that’s enough.

“I see it as a growing problem,” Antone said. “You just see folks expanding or pushing the boundaries on everything. With the pets, there’s an explosion of folks taking their pets in stores and restaurants.”

Antone knows the issue of pets in restaurants has already been addressed, but he feels something stronger is needed.

“I just feel like if we don’t put some sort of stopgap in place now, it’s only going to get worse,” he said. “Not everybody understands what the law is.”

The solution Antone’s proposing is laid out in House Bill 243. This measure would still allow restaurants to welcome pets at their outdoor seating areas, but would make it illegal to bring nonservice animals inside retail establishments, restaurants, bars, lounges, or “any other similar place of business in which the public assembles.”

The bill includes the following recommended penalties for breaking the proposed law:

(a) A warning for the first offense.

(c) Thirty hours of community service for an organization that serves individuals with disabilities, or for another entity or organization at the discretion of the court, to be completed within 6 months for the third and subsequent offenses.

Antone thinks his bill has a 60 percent chance of passing during the 2020 congressional session.

The Potential Impact Of This Bill

I’m very much in agreement with Rep. Antone’s concern about fake service animals. And I agree that people should comply with laws that prohibit pets inside restaurants. However, his proposal does a severe injustice to responsible pet owners. If passed, this legislation would create significant new barriers for pet owners who reside in Florida, and those considering it as a travel destination. 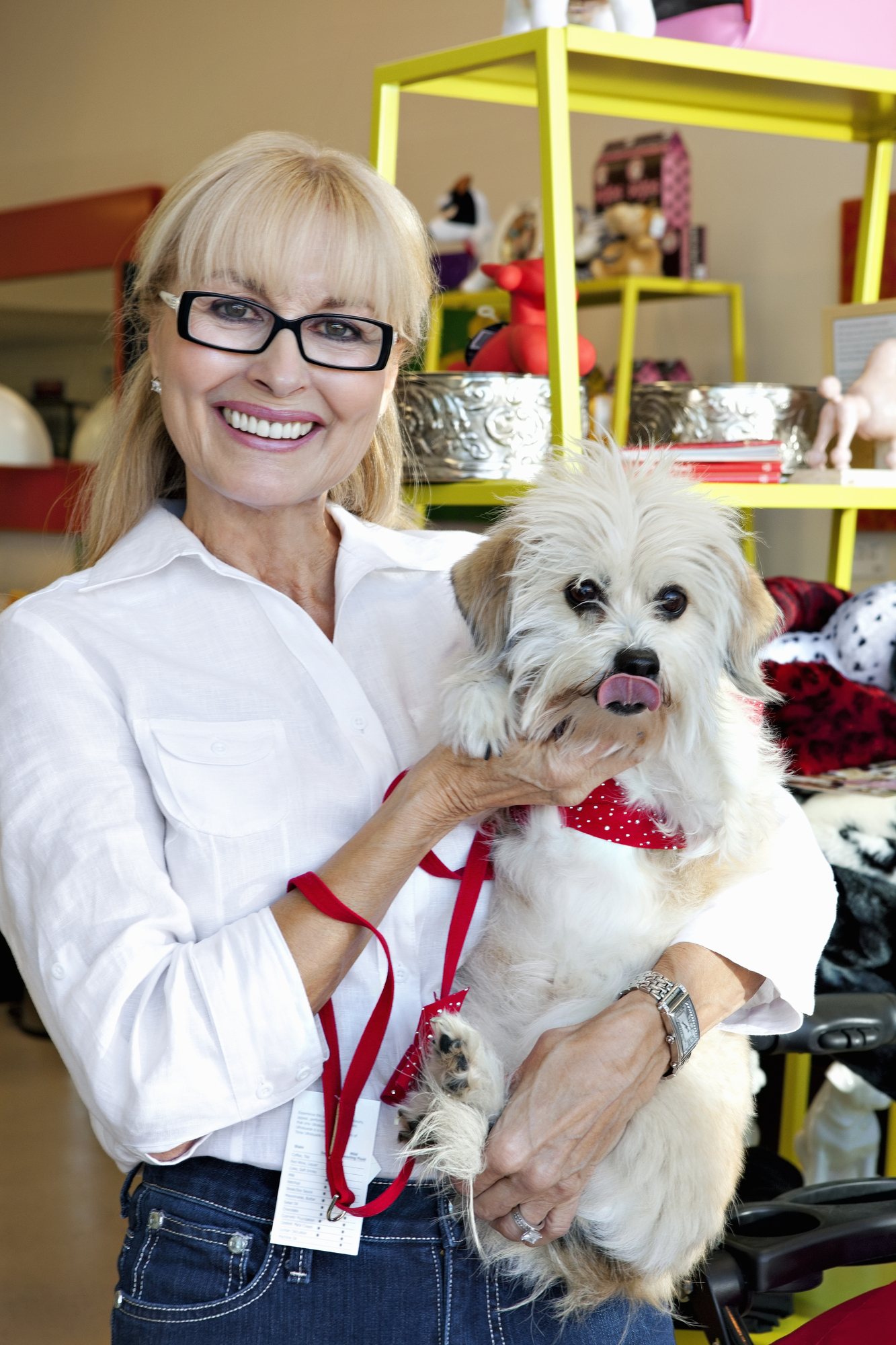 In addition, taprooms, coffee shops, winery tasting rooms, lounges, and bars would also be placed off limits. Certainly, we can imagine “places of business in which the public assembles” encompassing hotel lobbies and museums. And there will be no hope for the creative expansion of pet friendly destinations, like the dog friendly movie theater that recently opened in Plano, Texas.

Beyond driving away tourists and provoking residents, I worry that Antone’s bill could have more dire consequences. By prohibiting pets in venues that have historically chosen to welcome them, more people could feel driven to misrepresent their pets. And, given the relatively inconsequential penalties proposed, it’s foreseeable that this legislation could actually lead to more fake service dogs.

For those who would comply with the new prohibitions, prohibiting them inside might result in more pets being left in cars. That could be a life-threatening situation in a warm, sunny climate like Florida.

READ MORE ⇒  Is It Illegal To Leave Pets Alone In Cars

The bill proposed in Florida has further-reaching implications. Already 36 states have authorized laws addressing fake service dogs. If this legislation passes, it could become a model for the rest of the country, and the strides we’ve made to include pets in our lives would evaporate.

Obviously, I’m hoping that doesn’t happen. So, how do I think Florida should deal with fake service dogs?

First, Florida should enforce the law they already have on the books. The possibility of being slapped with a $500 fine and sixty days in jail is enough to get the attention of anyone considering misrepresenting their pet. 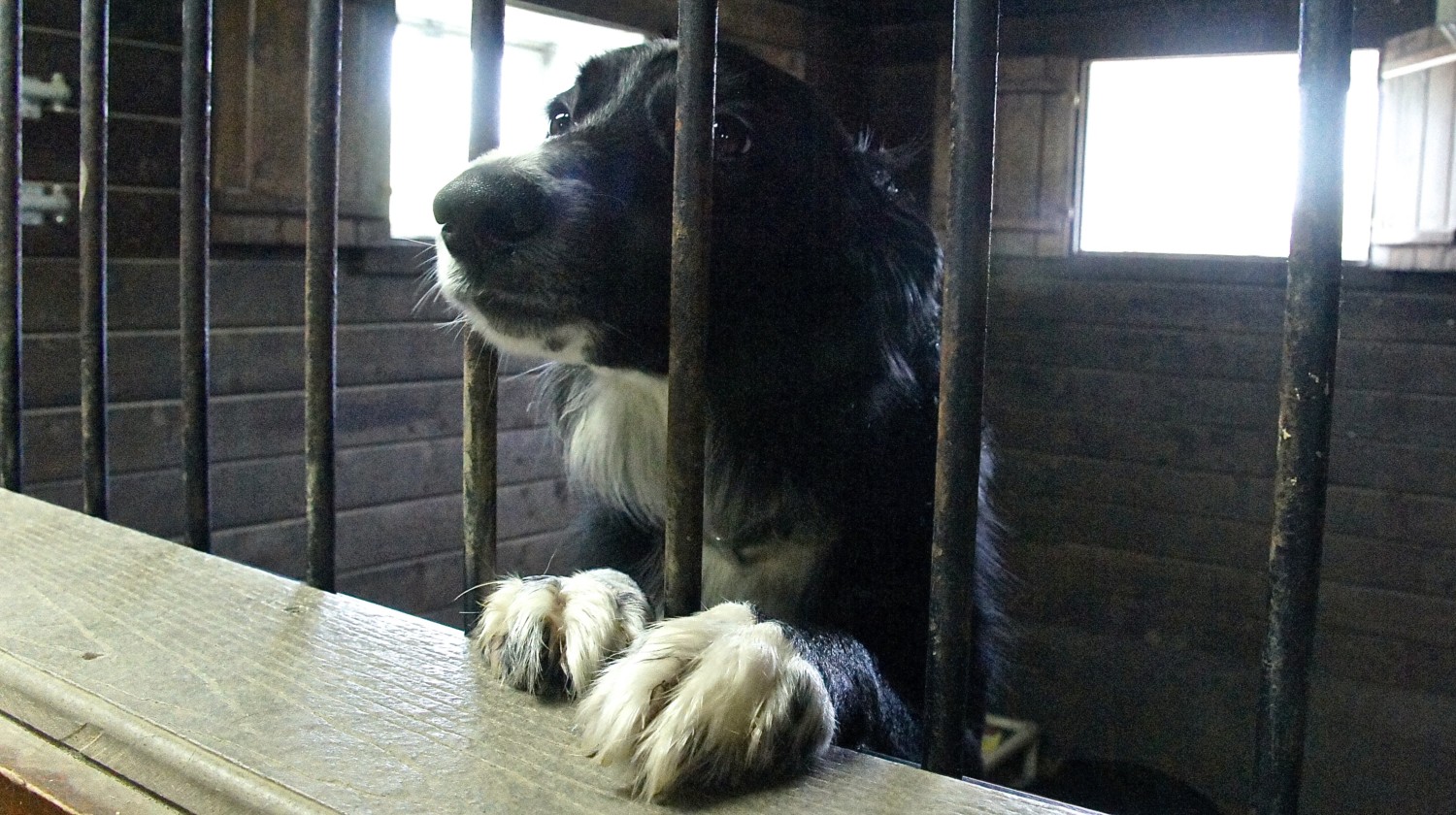 Across the country, we see establishments setting more inclusive pet policies. Rather than imposing more restrictive laws, why not encourage these business owners and empower them to be the first line of defense against fake service dogs?!

Many owners and managers aren’t aware of their rights when it comes to service animals. And recognizing a service dog might not be obvious. Service animals can assist people with a variety of conditions, such as autism, epilepsy, and post-traumatic stress disorder. So, when determining whether a person is being truthful about their service dog, business owners or staff can ask two questions: Is this a service animal? and What service is it trained to provide?

Responses to these questions can be a quick way to eliminate imposters, because legitimate handlers should have no trouble detailing the services their animal provides. It’s possible some brazen liars might also provide reasonable answers. But that still doesn’t mean a business owner can’t remove a dog from the premises.

According to the law, service dogs must be under control at all times. If a service dog behaves a manner that poses a threat to the health or safety of others, such as urinating or defecating indoors, or menacing or biting at other patrons, and is not under the control of the disabled patron, they may be refused service.

Anytime a business owner has an issue with a service dog, or suspects that a person is misrepresenting their pet as a service dog, the authorities should be called. Then … see Step 1. It’s actually very simple.

What Can You Do?

Rep. Antone says that his bill isn’t anti-dog. I think the public will feel differently. If you live in Florida, or know people who do, please send them a link to this article and encourage them to contact their state representatives.

You can also educate yourself on the differences between service animals, emotional support animals, and therapy animals. Spoiler alert: The only one of these allowed inside restaurants are service animals.

And, if you’ve been passing your pet off as a service animal, stop it. You’re ruining things for everyone.