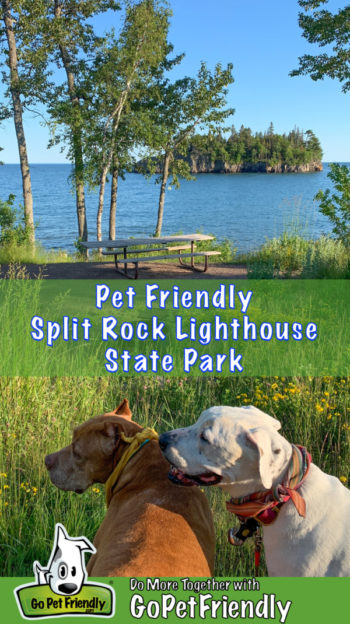 With 14.5 miles of pet friendly trails, a lovely 20-site campground, picnic areas, a kayak and canoe launch, and miles of shoreline, Split Rock is a great basecamp to explore the North Shore!

Tragedy was the catalyst that resulted in the building of Split Rock Lighthouse, now among the most photographed lighthouses in the United States. In 1905, three violent storms struck Lake Superior, killing 116 sailors, and sinking six ships within a dozen miles of the Split Rock River.

The shipping companies lobbied the federal government to expand navigational aids to assist them in crossing the world’s largest freshwater lake – specifically in this area, which they called “the most dangerous piece of water in the world.” In early 1907, Congress appropriated $75,000 for a lighthouse and fog signal at Split Rock, and construction began.

At the time, the only way to reach the 130-foot sheer rock outcropping was by boat. Barges hauled in all construction materials. A derrick and a steam-powered hoist lifted the materials to the top of the cliff. On July 31, 1910, the three light keepers arrived at their station and finally lit up the lighthouse.

This was a remote and desolate place, constantly buffeted by Lake Superior’s winds. But its dramatic location soon began drawing sailors and excursion boats to Split Rock.

In 1924, an extension to the North Shore Highway allowed access to the lighthouse by land. Additional staff came onboard to accommodate tours, and by the 1930s, Split Rock was a popular tourist attraction.

In 1945, the State of Minnesota created a 35-acre wayside to provide views of the lighthouse from the highway. The original preserve eventually became the 2,200-acre Split Rock Lighthouse State Park, protecting approximately four miles of shoreline.

In 1969, the light was retired and became part of Split Rock Lighthouse State Park. Notwithstanding its retirement, the lighthouse emits a light every November 10th, marking the anniversary of the loss of the SS Edmund Fitzgerald in 1975.

The lighthouse and the area immediately surrounding it is managed by the Minnesota Historical Society and does not allow pets. In that section of the park, pets are only allowed in the wooded median between the parking lots.

But that doesn’t mean you won’t find plenty to do with your pets here! You can hike, bike, or cross-country ski the 14.5 miles of pet friendly trails. Camping is available at the little 20-site campground, where tenters leave their cars in the lot and use the provided carts to transport their gear. And there are picnic areas, a kayak and canoe launch, and miles of shoreline to fish for lake trout, salmon, and brown trout.

The Day Hill Trail is the perfect option if you’re short on time and can only fit in one hike. Otherwise, it is a great way to start your adventure.

We huffed and puffed hiking to the top of this 1.5-mile loop, but the trees keep the trail shaded. Cool Whip and Hercules stayed cool even on a sunny summer afternoon. No matter how long it takes you get up there, the views of Lake Superior at the top are absolutely worth the effort!

There’s a beautiful fireplace at the very top, and legend says Frank Day built it here around 1900. The tale goes that he was attempting to woo his sweetheart with the promise of the rest of the house to follow. When she didn’t return his feelings, he abandoned the site. From this point, you can just make out the lighthouse in the distance.

Heading back down the Day Hill Trail brings you to the Gitchi-Gami State Trail. This 8-mile paved trail runs along the lakeshore between Split Rock Lighthouse State Park and Gooseberry Falls State Park.

The paved trail is great if you’re traveling with a dog who rides in a stroller!

A short walk down the trail brings you to the original Split Rock Wayside. However, the trees have grown, making it a little difficult to get a good view of the lighthouse.

Continuing on brings you back to the Trail Center. Here you’ll find lovely picnic areas – complete with fire pits and grills! Walk down to the lakeshore for an amazing shot of the Lighthouse.

Then, follow the Little Two Harbors Trail to Pebble Beach and settle in with your picnic amongst the stones for another stunning view!

We hope our trip to Split Rock Lighthouse State Park inspires you and your pet to see it for yourselves!

7 Essentials For Desert Hiking With Your Dog