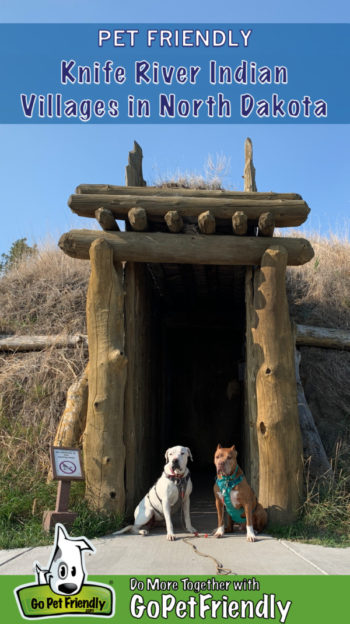 This quiet location along the Knife River, surrounded by farmland as far as you can see, wasn’t always so tranquil. At one time, nearly 400 people called this place home. And archeologists believe that this area has been occupied for more than 11,000 years!

Long before Europeans arrived in the Americas, the Upper Missouri River and its tributaries were acting as a highway connecting native people. The banks of the waterways also provided berries, nuts, and cover for game. The earliest people to visit here were nomadic, passing through as they hunted.

Eventually, the hunter-gathers followed. And the rich soil they found allowed them to adopt agriculture and build permanent villages. They harvested the bounty provided by the river as it cut through the prairie.

Then came the Hidatsa and Mandan. They’d been living along the Knife River for more than 200 years when the first French trader arrived in their village in 1738.

During the summer, the tribes lived on the natural terraces near the river in large earthen lodges. Measuring 30 to 60 feet in diameter, the women of the village were in charge of home construction.

Each lodge was home to extended families of 5 to 15 people. Women also tended the gardens, which provided much of the family’s food.

The men focused primarily on hunting and raiding. Bison, deer, small game, and fish supplemented their diet. These animals also provided hides and bone for tools. Raiding was a way to collect horses and other loot.

In 1804, Captains William Clark and Meriwether Lewis embarked from St. Louis on their mission to explore the Missouri River. They were searching for a passage to the Pacific Ocean.

After traveling 1,600 miles, they arrived in what is now the Knife River Indian Villages. And with winter approaching, they built a fort and planned to continue their travels in the spring. Lewis and Clark named their post Fort Mandan, in honor of their neighbors. Throughout the winter the travelers visited and shared information with the tribe.

Eventually, Louis and Clark met Toussaint Charbonneau, a French-Canadian trader. He’d been living among the Hidatsa with his wife, Sakakawea (Sacagewea). Lewis and Clark recognized that Sakakawea’s translations of the tribal languages could be invaluable on their journey. So they hired Charbonneau and he, Sakakawea, and their son, Jean Baptiste, joined the expedition.

Although the group did reach the Pacific Ocean, they discovered no waterway across the land. By August 1806, the expedition had returned to the Knife River. Charbonneau, Sakakawea, and their son returned to live with their Hidatsa relatives.

Over time, westerners exposed the native people to diseases for which they had no natural immunity. In 1837, a smallpox epidemic decimated many Indian nations.

By 1845, the Mandan and Hidatsa tribes had abandoned their villages along the Knife River for a more remote location. Now all the visible evidence that’s left of these great villages are the depressions in the ground where the earthen lodges once stood.

Leashed pets are welcome to walk the trails and explore the grounds at the Knife River Indian Villages site with you. They’re not allowed inside the visitor center or the reconstructed earthen lodge.

The Village Trail provides the best views of the former village sites. It is a beautiful walk to the tranquil Knife River.

The rangers at this recreation site are also very friendly and informative. They’re happy to provide you with a tour of the reconstructed lodge behind the visitor center, so be sure to ask.

One especially astonishing fact: it took about 9 months to complete the reconstructed lodge with modern equipment. In contrast, once the materials were gathered, the women of the village constructed a new lodge in 7 to 10 days!

While you’re in the area, be sure to visit Lake Sakakawea State Park. And if you’re heading west, check out Theodore Roosevelt National Park in Medora.

We hope this post helps make your trip to North Dakota even more fun!